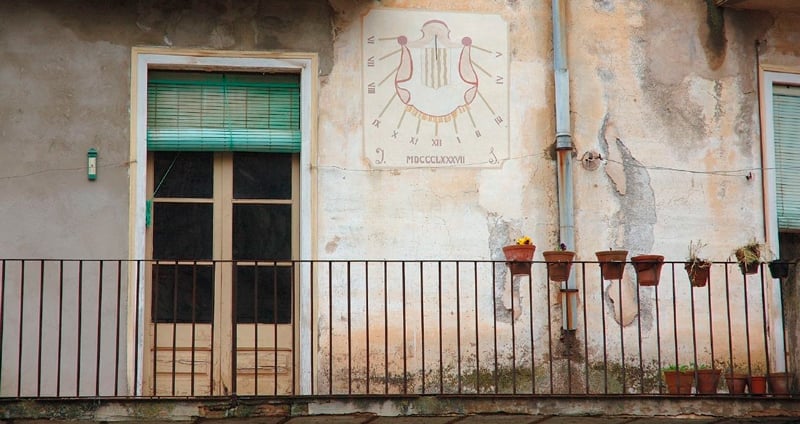 This town, located east of the region of Priorat, in Tarragona, is known for two reasons. One, by the wine lands in which it sits, to the valley of the river Cortiella, which guarantees a rich vines and the existence of five renowned wineries in just an area of 29 km 2.

However, the second reason has nothing to do with oenology, but something much more striking for how rare it is. And in Porrera more watches than any other part of Catalonia (and the country). Sundials to be more exact, these ancient instruments that measure the passage of time through of the sun and the shadows cast by a gnomon or style.

Exactly the village hosts its streets fourteen sundials mostly oriented to the southeast, very different from each other that show visitors an exquisite variety of colors, shapes and types. All located on the facades of buildings built in the nineteenth century, precisely between the years 1840 1880, in the economic and social splendor that brought the city to become the place that made the time your letter.

Do not be late to visiting watches Placing the Plaza Catalunya as the starting point of the route, the first watch that we will be crossing the river, Cal Ros (1), a watch that has a shield and whose hour lines ranging from six to five in Roman numerals. Crossing the Old Bridge, which managed to withstand the floods of 1893 and 1994, arrived at the Plaza de la Guineu (2), where it is one of the most popular watches. It frescoed, it is a vertical and evening watch since its hour lines only go one p.m. until eight because the sun does not give on that front until early afternoon. The curious thing about this watch is placing their gnomon (the stick that casts the shadow) as to be parallel to the Earth 's axis must also be placed parallel to the wall.

Near this place we came upon the building of the former Cooperative (3), which looks a clock in it, and if we continue into the ravine and crossed arrive to another place where we see the fourth clock, called logically El Barranquillo ( 4).

The fifth clock is located in the Plaza Ca Les Viudes (5) and is one of the most difficult to find because it is placed on a stone plaque on the heights of difficult visibility. The clock Ca l'Amoros (6) is found in Mestre Llurba street, leading to the castle and take us to the seventh (7), under restoration and the top of Porrera. This watch is a copy of another that is in a farmhouse in the village.

Now it down again. We will do Street Hospital, which will lead us to the clock Cal Pla (8), which curiously marks only half hours. If we continue to get down to ninth in Vilanova (9) Street, which consists of a simple colored with golden and ocher tones circle, and the tenth, known for Cal Peiri (10).

Cal Vallvé (11), the eleventh clock, not indifferent to any visitor, as it is characterized by the elegance of his drawing. It also enjoys a large colorful twelfth clock, The Seraglio (12), punctuated by ochres, greens and salmon, which make it very colorful and flashy. On the same street where is it, we discovered the named Cal Rabascall (13), whose purple and white paintings give a specific touch, contributing to the Arabic numerals painted around the clock.

Finally we finished our tour in the largest and most iconic watch, known as El Portal (14). Of all the watches, the most popular is undoubtedly the located in Pau Casals because of its size, it is one of the largest, and its complicated technical copies of Catalonia, which contains solar and zodiacal lines. However, the most curious of this watch (and that makes it particularly attractive) is the inscription containing down, with some lines that look more like hieroglyphics than anything else.

"You who are watching me, takes good care what I say, this makes great sense, to see if you understand, then you'll have fun, when you have understood, if you do not understand what I say you go to Salamanca.
The sun is on the ecliptic of the zodiac, never happens with an alphabet enough to know what
it means, what signs is dedicated and to what degree the sun is... "

Despite the thousands of attempts, none of the people or visitors who read them knew what they refer. He seemed to indicate that the author wanted to laugh at all those watching him.

However, recently its significance was discovered in the book "From Gnomonic, u Theoretical and Practice of Reloxes Sol" whose author, Father Thomas Vincent (1651-1723), stated that it was an empirical method know on what day of the month the sun king enter in the box of the zodiac. As mentioned, Porrera sits on land famous for its vines. Not surprisingly, the Priorat wine has its own denomination of origin and is one of the most famous in the country. The mountains, steep slopes or how to grow grapes in terraces, provide a peculiar taste their wines, seasoned by a rather dry Mediterranean climate.

In the few kilometers that owns this town live five wineries renowned fame spread, well deserved fame that has caused have their own route. The oldest of them, the Celler Cal Pla, takes 200 years of history and is, without a doubt, the oldest in the area.

However, one stands out more than the others for being owned by the singer Lluís Llach. The Celler Vall Llach opened in the late nineties and has its origin in the love that the artist has to this village, where he spends much of his time. So much so that he named one of his albums, "MónPorrera".

On the occasion of this album, created the "MónPorrera: Lluís Llach - Miquel Martí i Pol" route, an interactive guide that shows how the disc was developed with memories and feelings of the poet, as well as testimonies anonymous that they saw birth.

Other things to visit We can not say goodbye to Porrera without climbing to the top of the hill and visit the hermitage of San Antonio Abad, dated in the seventeenth century and has a single nave with a belfry. His wonderful mountain views Montsant, Priorat symbol, make this tour memorable.

On 17 January, the day of St. Anthony, patron saint of animals, the people go up to the chapel dedicated to the saint with their animals to be blessed. In the past a race summoned from there to the village in which only involved the young and daring, because the road has a strong and dangerous slope, resulting in a fall more likely.

Nor can we miss the chapel of San Juan Evangelista, the s. XVIII and neoclassic style. As a people of its own, Porrera has its own gastronomic culture which highlights the kinks, especially coca egg, which is preferred for its people, honey and sausage. Obviously, the quintessential drink is wine.

However, the most characteristic of this town food is definitely known as rotllo, a kind of typical of the festival of San Blas roscón. On February 2 day the locals buy the traditional rotllo in bakeries, but do not consume that day but will have to wait for the next to do, the very day of San Blas, as tradition.

Driving Directions: From Barcelona take the AP-7, direction Tarragona. Before reaching this town, take the E-15 highway, direction Reus. Before accessing this population, take the high road T-11 and continue along the N-420 until we reach our destination.

#femGastronomia  #PatrimoniDeCatalunya  #femRutaPerCatalunya
You may also be interested in: Walking routes in Catalonia | Guided tours of the towns and cities of Catalonia | The sunrise and sunset | Enjoy wine and wine tourism in Catalonia | Go hiking and discover Catalonia on foot | DO Priorat

Route through the landscapes of the hazelnut

We propose a discovery of the agrarian landscape and the cultivated…

We will access this route by car from Gerri de la Sal, located…

At the lower elevations the green surrounds us, here we discover…

Route of the mills in Santa Coloma de Queralt

Santa Coloma de Queralt has no interest only for its monuments…