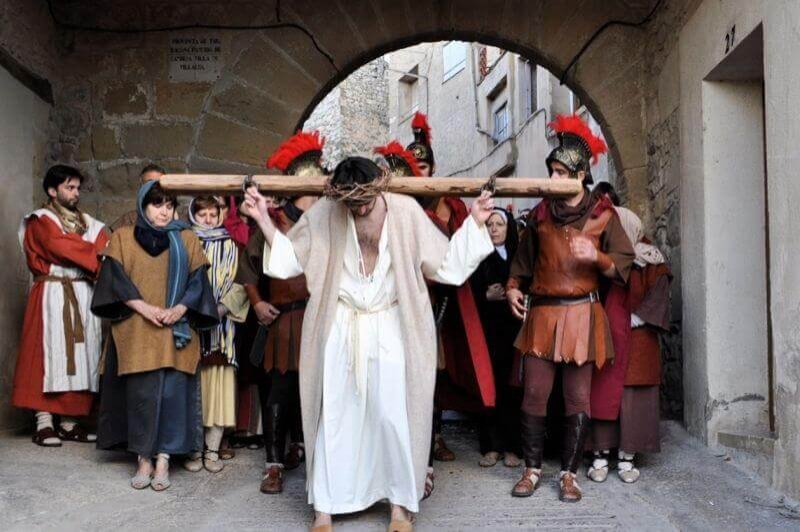 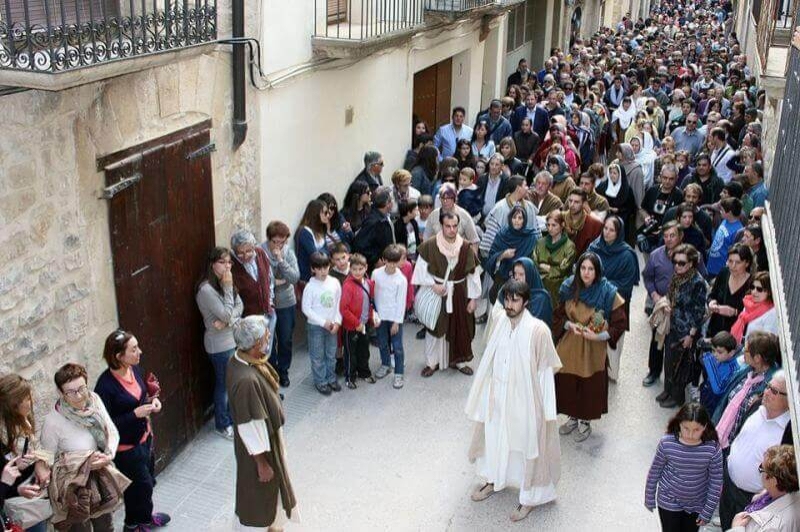 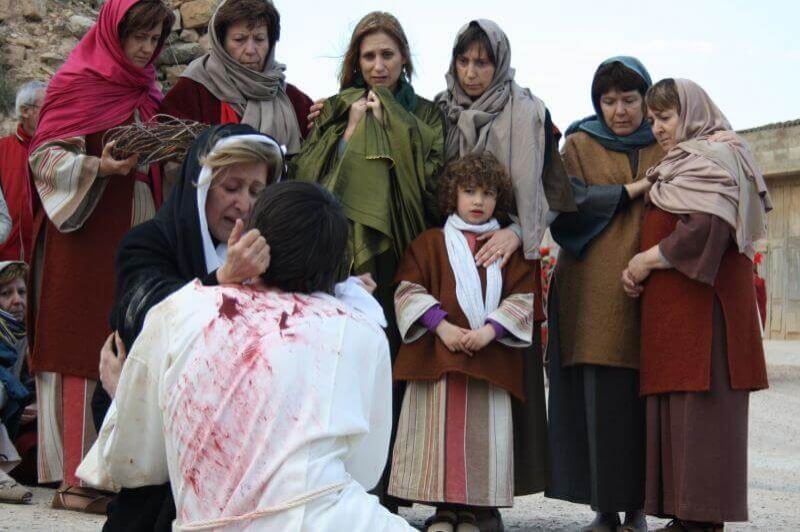 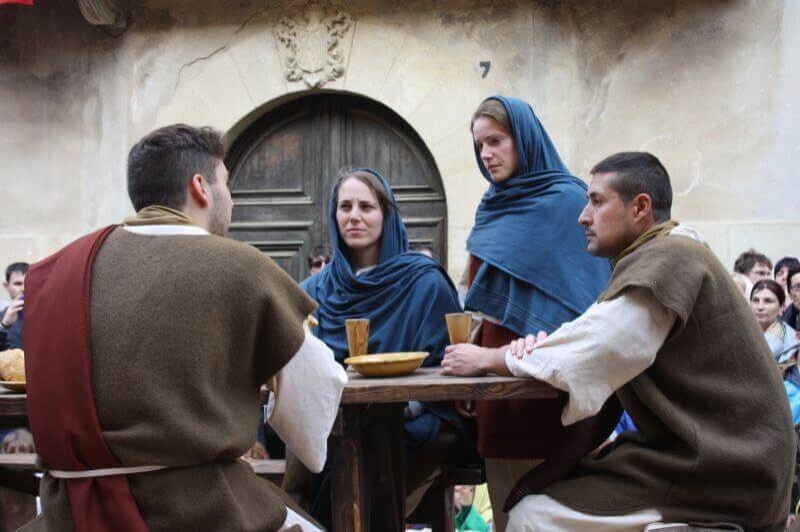 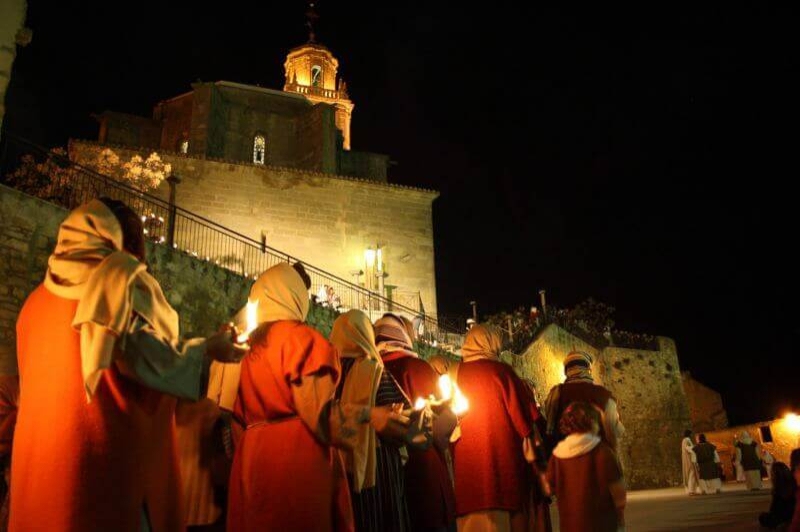 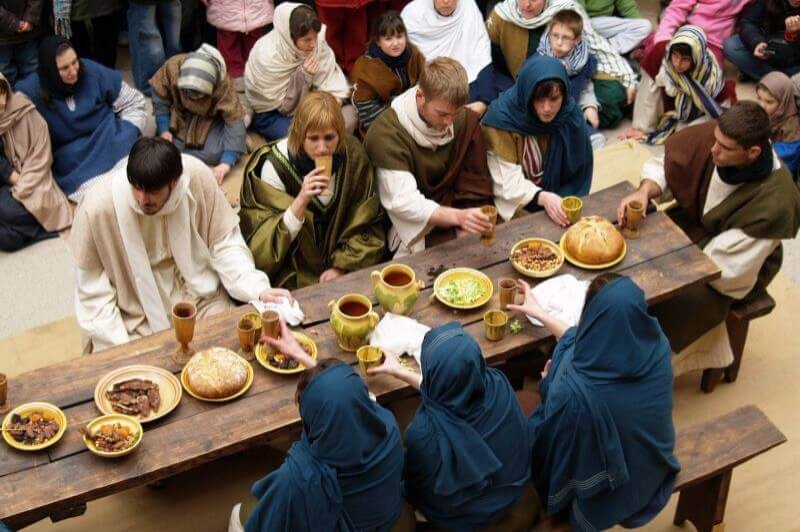 The Passion of Vilalba

The Passion of Vilalba brings us closer to the social and cultural reality that Jesus lived during the last days of his life, from the entry into Jerusalem until the crucifixion. The work, which runs through the streets and squares of the historic center of the town, is a clear example of the purest theater, as the public participates in the twelve scenes mixing even with the actors and actresses.

This vision of the Passion reflects the most social side of biblical history, hence the importance of the people of the town and above all of the women, always forgotten, who take a special role from the first moment until they reach the foot of the cross.

The oil lamps, the light of the torches, the clothes of sack, the smell of the aromatic herbs and the sound of the crows are the elements that make up this humble representation without special effects, where the importance of the word and the dialogue are the main protagonists.

The Wine and the Oil of the Passion

Wine is one of the natural products most clearly linked to the Mediterranean culture, together with oil and bread. In relation to the territory, Vilalba is a town with a long viticultural tradition that has a good number of wineries registered in the DO Terra Alta.

For 10 years the Patronato de la Pasión has been making an old-fashioned wine, similar to that of the Roman era, which could well be the one that Jesus himself drank at the last supper. The whole process is artisanal, from harvest to racking and storage in clay amphoras.

On Holy Saturday morning the opening of the amphoras takes place within a commented tasting where, among others, all the wineries of the town participate and the Passion Wine is tasted for the first time after having been sealed months before.

On the other hand, Saturday of Ramos takes place the tasting of the oil of the Passion, elaborated in the stone, in the frame of a day dedicated to the world oleícola where participates the PDO Oil of Terra Alta. You can also try the unleavened bread baked in the old city oven as the Jews did during the Pessah.

The Patronato de la Pasión is committed to an integral tasting of the territory, be it gastronomic, cultural, artistic or heritage of the Terra Alta and the Ebro Lands in general.

The Crafts and Typical Products Market offers the opportunity to make known our artisans and artisans, as well as taste our oils, nuts, pasta, sausages... among many other products. In addition to the Wine Route, where you can taste wines of great quality.

Through the Quick Paint contest you will enjoy art in its purest state, seeing how the paintings come to life as you walk through the medieval streets, visit the old Brotherhood of Our Lady of Grace or ascend to the highest bell tower of the Ebro Lands.

The traditional dances of our own, our musicians and the talk of the actors and actresses, are also one of the mainstays of this philosophy that focuses on the recognition and immersion of visitors to the essence of the territory ebrenc and terratlí. In addition, as a novelty, a children's story about the history of the Passion of Vilalba has been published to keep a special memory of your visit. 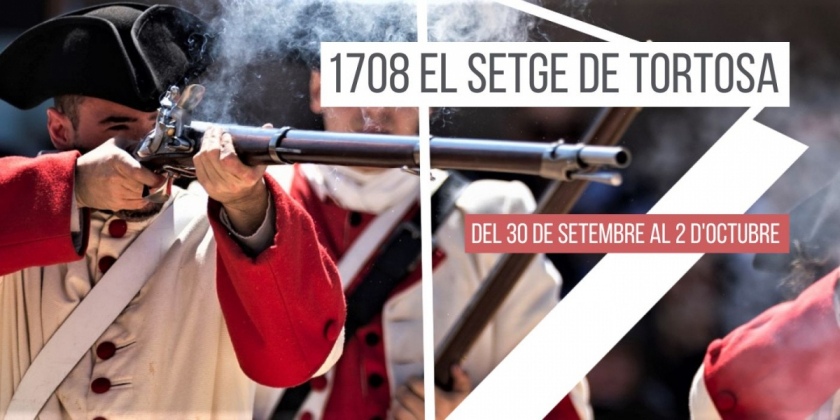