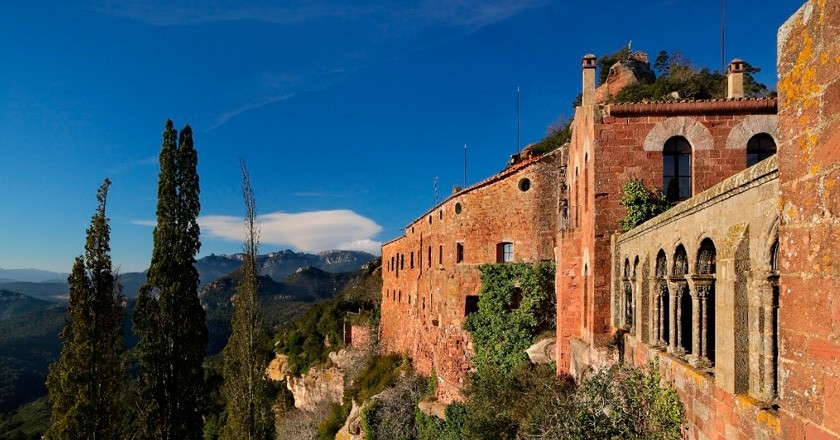 Let yourself be carried away by the most beautiful and authentic corners of the Costa Dorada Mountains; its landscapes of contrasts give us from extensive forests to long beaches, going through a culture and a tradition far away. The Mountains of the Costa Daurada opens the doors to discover your 10 essentials that you can not miss.

It is located in the municipality of Riudecanyes. From the urban center, you have to take the road that leads directly. It is also reached by local roads from the Argentera and from Vilanova d'Escornalbou.

The monastery castle of Sant Miquel de Escornalbou dates from the late 12th century and the beginning of the 13th. Its construction was promoted by Alfonso I, who gave it to the church of Tarragona. Both the castle, center of a large barony, and the church of Sant Miquel, were inhabited by Augustinian monks, from 1580 by Franciscans until 1835, when the confiscation took place. In 1843 it was acquired by John Bridgam and in the first decade of our century, it was acquired by Eduard Toda, who rebuilt it and began the restoration. There he gathered interesting collections of engravings, ceramics and objects of all kinds, as well as a remarkable library.

The most important elements of the complex are the Romanesque church, the remains of the chapter house and the cloister, as well as the home of Mr. Toda, carefully restored, the visit of which will allow us to observe what a manor house was like in the early 1900s From the arches of the cloister, and especially from the hermitage of Santa Bárbara, located at the top of the set, you can enjoy one of the best views of the regions of Tarragona.

Facilities adapted for people with disabilities and the blind. Guided tours for school groups and adults: Information on the phone 977 834 007 and reservations on the phone 695 186 873.

In Prades it is striking that everything is surrounded by the red color of the stones that raise the wall, the church and a good part of the houses. This color is that of the sharp stone that forms a good part of the periphery of the city. This characteristic, unique in Catalonia, has given it the name of Villa Roja.

Among the places of interest of the town we find the Plaza Mayor, the Renaissance spherical fountain, the Church of Santa María la Major, Gothic, a single nave with a pointed vault and Renaissance façade topped by a triangular front. We also find stretches of wall with remains of the castle, two Romanesque portals, several samples of Gothic art and a quadrangular defense tower. 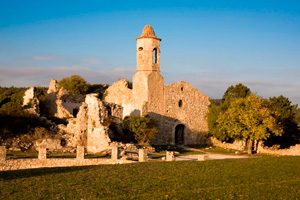 The Mussara is located in the mountains of Prades, at 990 m high, near the Airasses cliff, from which you can enjoy a breathtaking view of the Camp de Tarragona and, on clear days, you can see the Ebro delta or, even, the Balearic Islands. The highest part of the term is 1,071 m above sea level. The town had a rich and particular history.

It is thought that the remains located in the Mussara allow to believe in the existence of a garrison dependent on the vali of Siurana. This belief is endorsed by the Arabic place name given to the town and which can mean flat. Thus, the depopulated nucleus offers pleasant sensations. His interest lies in the magical and emotional geographical situation but also in the history and in the buildings and the distribution of the old town. In addition, this site is a starting point or step of numerous excursions that lead through the most beautiful places of the Prades Mountains.

The landscape of the mountain range transmits the sensation of remote, isolated place, with mountain ranges of difficult access and unknown but at the same time close to the whole of Tarragona. The sierra offers us many possibilities to interpret the landscape, both from the point of view of traditional life related to the agricultural past and forest use of the territory, as well as the interpretation of the natural environment.

The high parts of the mountain range show an important seasonal chromatic variation thanks to the deciduous trees that dot the holm oaks. The lower parts, usually dominated by white pine, do not experience this dynamic. Throughout time, the scarce human activity in these places has prevented important alterations of the landscape.

From a large part of the Campo de Tarragona you can see the Mola de Colldejou between the Argentera and Llaberia mountain ranges . The shape of millstone makes it worthy of that name. It is an emblematic top of Tarragona, nice to climb and that will allow us to see the field from Tarragona, the tip of Salou and, practically, to Vandellòs on the one hand, and part of the Priorat, Ribera d'Ebre, the Llaberia mountain ranges, Cardó, Montsià, and even the ports of Tortosa. Its summit has an altitude of 914 m. Of the mill, it is worth highlighting the findings of what could be the remains of one of the largest Iberian settlements found so far in our counties.

The landscape of the Llaberia mountains and the Mola de Colldejou is the setting in which the Baix Camp villages develop their quality agricultural products. 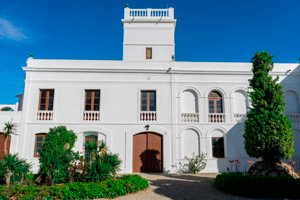 Joan Miró (Barcelona, 1893 - Palma, 1983) is one of the most universal Catalan artists of the 20th century. Painter, sculptor, engraver and ceramist, known for his discretion and legendary silences, is through his work that shows his rebelliousness and disagreement with the historical and political events that he has to live.

Rooted in the landscape of Mont-roig, first, and later that of Mallorca, where it was finally established in the fifties, was decisive in his work and language.

Mas Miró was the model of La masía, the most emblematic creation of the artist's figurative stage, but it is also where his later work germinated and matured and where his complex symbolic language was outlined.

El Mas Miró is made up of a series of buildings from various periods, from the 18th century to the 20th century. Buildings like; the garden, the workshop the henhouse, the fields, the chapel and the corral.

6. Hermitage of the Virgin of the Rock

It is located in the municipality of Mont-roig del Camp, west of the city. The hermitage is already mentioned in 1230 documents.

The church and the hotel industry were rebuilt after the French destruction, in 1811. On top of the hermitage stands the chapel of Sant Ramon, built in 1826 and which still serves as a guide to the sailors. The hermitage is a symbol of the region.

The temple of Sant Ramon, of cubic and whitewashed appearance, initially feudal castle of the XIII century, stands out on the main building. Next to the hermitage we will find a natural viewpoint where it is reached by an open path in the rock and that leaves the parking lot by a staircase with a wooden railing. All the time we can observe open cavities in the red stoneware. The hermitage offers a panoramic view essential for any visitor.

7. Pratdip and the Dips 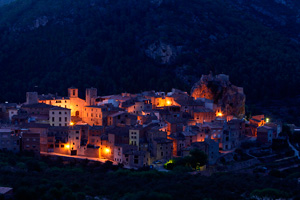 Pratdip, village of medieval origin, from which the first references date back to 1154. The initial structure of the town was with the church in the center and a wall that surrounded it.

Today you can find: the church, the castle and two defense towers that once formed part of the medieval wall. The church, built in the mid-twelfth century, has a Romanesque style, with Gothic finishes. Inside the church is the old altarpiece of Santa Marina Renaissance style, dating from 1602.

The castle, located in the highest point of the municipality and of which at present only some walls and partial parts of the battlements of the original building are conserved, offers to the visitor a magnificent view of the natural environment that surrounds us, in the Sierra of Llaberia.

Pratdip, a village of ancestral legends, and linked to the Dip, a mythological being that gives the town its name as well as being on its coat of arms, a legend in which the writer Joan Perucho was inspired in "The Natural Stories" by placing the tomb and residence in the castle Onofre Dip, a vampire that frightened the local population.

The reservoir is a nice place to take walks and admire the landscape that surrounds it. If we stop at the edge of the road that leads to Duesaigües to see the marsh, in the direction of the town of Riudecanyes, we will get a pleasant surprise.

The blue and closed water of the reservoir is above the water of the sea that shines very far and immediately after the enclosure wall of the reservoir. There is a point where three of the best bluish tones that the Baix Camp can offer converge, superimposed: that of its fresh water, that of the changing blue of the sea and that of the clean sky that defines the towns that look towards the Mediterranean. 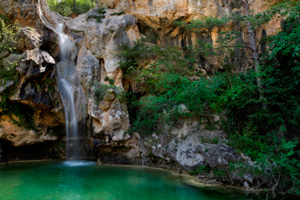 The Gorgs de La Febró are a beautiful set of waterfalls near the Febró and the road from Vilaplana to La Febró. Together with the chasms, they are the most known and visited place in the town.

It is a river, affluent of the Siurana, whose channel is formed by limestone, and due to the erosion of the waterfalls, these have formed very characteristic deep puddles that in summer become an ideal place to take a good bathroom, fresh and invigorating.

Its access is quite fast and easy. The fastest way to access is from the Vilaplana to Febró road, at km 25, near the Mas dels Frares and only follow the red and white markings of a GR that, at this point, crosses the road Arbolí road.

The orographic knot of the Prades Mountains occupies practically the entire Prades area. In the north-eastern alignment, the massif culminates in the hill of Baltasana, 1,201 m, flanked on the east by the mole de l'Estat and north by the mountain of Salas. The hill is between the Conca de Barberà and the Baix Camp, between Vimbodí and Poblet and Prades, about 2 km in a straight line from the latter town. With its altitude, it is the highest point of these mountains.

It is accessed by the long-distance path GR-171, which passes to play. It forms part of the crest that divides the basin of the Ebro (Montsant river) from that of the Francolí. It is also the highest peak in the Baix Camp and Conca de Barberà regions.

Cycle of conferences on the heritage of Sarrià de Ter


Sarrià de Ter makes its heritage known through different telematic conferences that can be followed through Zoom, following this link: bit.ly/CiclePatrimoni3 Do not miss it!