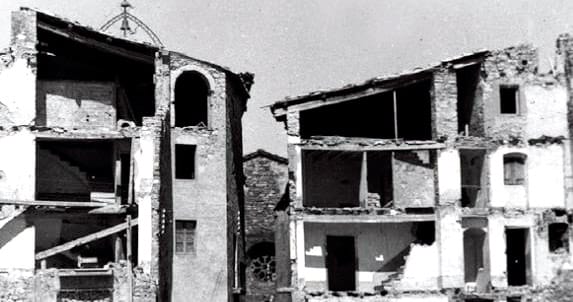 One of the bloodiest episodes in the recent history of Catalonia was the War Spanish Civil.

Many towns in Catalonia were the scene and witnessed confrontations and terrifying episodes, which are still present in the memory of its people, its landscapes or on the facades of buildings.

The population of Isona , in Pallars Jussà, was one of the municipalities who witnessed directly a military conflict of this war which involved serious damage, since 75% of buildings were toppled or had to tear down. And it Isona lived, for a time, straddling two fronts - the Republican and Francoist - still the same township boundary line between them.

Currently, this part of the story is remembered, in a way, thanks to the public institution of Memorial Democratic Government of Catalonia which includes the knowledge and historical memory as heritage.

This facility and the population of Isona have made ??it possible today to visit in this city spaces rebuilt after the war. well as vestiges of the armed conflicts that were experienced intensively from April 1938 to January 1939. Between April 1939 and January 1938 Isona became the front line of fighting between the army experienced war Francoist and Republican.

The first attack was the population suffered a bombardment by Franco's troops in April 1938, as the town was occupied at that time by the Republican soldiers.

Then all the inhabitants of the Conca Dellà were frightened, abandoned Isona and villages took refuge in the rear, while the Republican army resisted as he could and stopped the advance of the rebels.

The position Isona behaved as front line that the municipality suffered significantly, the grievances of the confrontations. He received constant attacks by Franco, who, also, defensive bunkers were built in order to protect a Republican backlash.

In fact, when the conflict in this area concluded the bombings had destroyed the center of town and 75% of the buildings were torn down or demolished by its poor condition.

The confrontation ended, specifically, the January 23, 1939 when he entered Isona the 13th Battalion of Zaragoza, falling, therefore, into the hands of Franco.

The Civil War left in Pallars Jussà historical heritage based on military archeology. In the natural environment of the population Isona can be found hidden in bunkers and trenches vegetation and flora, as attacks were more intense in this geographical and both armies were built many areas of defense to protect themselves from attacks receiving .

Currently, we have designed an itinerary that tracks bunkers and trenches that were raised, and can understand the fighting that took place in the area.

This route leads to Posa Republican Front, an area that was occupied from April 1938 to January 1939 for the second line of defense of Republican fighters in order to prevent the advance of the rebels toward the Valle del Segre .

The area is close to the shrine of the Virgin of Posa and the route is marked with flags and interpretive signs. Specifically, in a chapel near the bunker remains of two bodies Bóixols controlled road. And from the religious center door can see what the Pallars panoramic front and allowing to control the movements of the different armies.

Following the road to the recreation area belonging to the chapel are preserved a set of fortifications that create a route that passes between bunkers, trenches and supplies structures that were occupied in 1938.

Also, toward the paleontological of footprints of Posa houses the remains of a Republican bunker was damaged during the war.

Moreover, this route allows you to enjoy the landscape and natural environment of Pallars Jussà own.

The reconstruction of a devastated village

Isona not only had to be the boundary line between the Republican and Francoist combatants and live tragic scenarios, but also suffered a significant and massive destruction of the buildings of the village. For this reason, when the war ended, Isona underwent a reconstruction plan sponsored by the Directorate General of Devastated Regions, which still show effects.

This plan of reconstruction, during Franco's dictatorship, began in August 1940 and remained active until 1957 and intended to respond to the destruction caused by war.

400 people benefited from this plan and were subsequently designated as cities "taken by the Leader."

For Isona some spaces were reconstructed as Plaza Bisme Badia, schools, local oven, the water tank, the houses of St. Vincent and the power transformer, which, today, are still standing and integrate urban itinerary we recommend you to reminisce the people.

Each of the spaces is supplemented with an information board.

Badia Bisme Square, for example, was more damaged space Isona and reconstruction became the most important area of the town, and who placed the most important buildings, City Hall and the rectory. In addition, thirteen homes were built in order to solve the problem of housing and meeting the needs of farmers. However, the first works that were undertaken were the houses of St. Vincent Street and were also aimed at middle-class farmers.

Also restored the municipal oven was in ruins, but no longer extant. In its place is, today, a public square that houses elements of the old furnace.

Furthermore, this reconstruction had an aspect of modernization, as took actions to improve resources in the municipalities. Thus began a project for water supply and sewage, which has as a benchmark the water tank.

In addition, all people operated by the Directorate General of Devastated Regions are building a school. Isona was no less, with a capacity for 150 students, the school was built outside the village.

The Cordillera del Montsec, by their nature, welcomes attractions…

The population of Caldes de Malavella was involved, by degree…

Ernest Hemingway was an American novelist who won the Pulitzer…

Amid the imposing Pyrenees step opens the Cerdanya, a singular…