More than accommodation, the Palauet is an authentic medieval and romantic experience.

The Palauet de la Muralla is a stately mansion in the historic center of Balaguer, in the old Jewish Quarter. Located near Mercadal Square, the main facade, neoclassical, gives Street Miracle, and later poured into the river Segre, sharing the way round on the wall with the neighboring houses.

The house, originally medieval, was one of the Jewish houses in the city. Later, along with other neighboring buildings, lodged a leather tannery. During the last century, had the role of school and convent of nuns. They have recovered painted ceilings and moldings and coffered ceilings, and mosaics and wooden floors of the different rooms, decorated with antique furniture.

Around El Palauet you can visit parks, wineries, churches, cloisters and many interesting places in the region of La Noguera, as well as enjoy various nature activities such as horseback, canoeing, paragliding or contemplation of the stars.

Acceding to the house through the main entrance, the visitor is in a large hall, which highlights the stone slabs covering the floor and the monastic choir stalls. A first flight of stairs leads to a spacious room. Continuing the ascent, now a covered courtyard, you reach the first floor, where the main rooms of the house.

The back is poured into the Segre river from the old city wall, sharing the passing round of this wall with the neighboring houses. We proceeded to a careful restoration and decoration of the house, with furniture and antique pieces acquired or churches of the region in ruins, thus preventing its disappearance.

In the basement, of Jewish origin as reflected in the water pipes before it, they are the "cellar" with two wells or cisterns that should serve for the conservation of oil and other products of the earth, and the block; There is also a corridor, now walled up, which communicated with the church of San José. In one of the rooms in the basement also it finds a massive stone table in one piece. On the back of the house stands the courtyard, enclosed by thick stone walls of the building and the wall, through which you reach the outside area on the river, known as "El Portalet".

They have recovered the original painted ceilings and moldings and wainscoting, thanks to the intervention of master craftsmen such as Ton Camarasa carpenter and painter Angel Soldevila. They have been preserved mosaics and wooden floors originating from the different rooms. Foremost among them, the room, with a mirror of Murano, the dining room with its fireplace hardwood, or library, with more than a thousand volumes, many of them bound in parchment, from the Franciscan convent of Santo Domingo and the Hazelnuts convent...

Palauet features of the wall

The Palauet is a tourist accommodation for up to nine guests in four bedrooms, three double and one triple, all with private bathroom. The best experience is to spend at least two nights at the Palauet and so left ooze by years of story, the different times, for art and antiques hanging from their walls.

The large spaces and halls of the ground floor, basement and patio wall, allow you to organize celebrations and events of all kinds with ample room were celebrated birthdays, dinners, exhibitions and conferences. Under Palauet offers a range of possibilities. You can also organize events in the halls and terrace of the main floor, getting a unique and memorable setting.

Registration Number in Tourism Register of Catalonia: HUTL-000489
Related articles: Unique accommodations where you can spend an unforgettable night 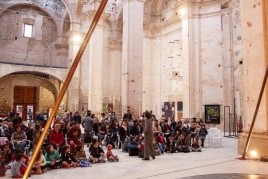 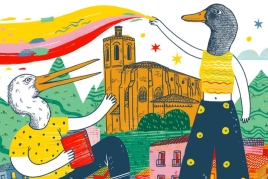